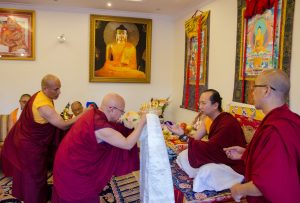 Here is a brief outline of what we had planned for 2020, which will now be offered in 2021 at dates yet to be decided. 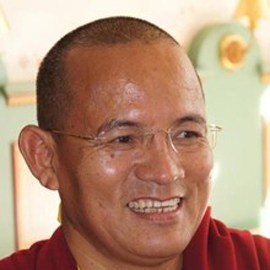 This course will be of immense benefit to students who have received the Hevajra empowerment and prior teachings on Ngöndro and want to receive detailed instruction on the practice from the master, Khenpo Jamyang Tenzin.

Khenpo Jamyang Tenzin, abbot of Tsechen Dongag Choeling in Mundgod, South India, studied under the late Khenchen Appey Rinpoche at Sakya College in Dehra Dun where he also taught for several years, and completed a three year retreat under the guidance of HE Chogye Trichen Rinpoche. From 2001 to 2013 Khenpo la taught philosophy and meditation at IBA and we are thrilled that he has accepted our invitation to return in 2020 to present this Ngöndro course.

Known for his deep understanding of the teachings based on his extensive studies and meditative training, Khenpo la presents the Dharma to a modern audience in a way that is always both very practical and intensely profound.

The Complete Path, Year 4, with His Holiness the 42nd Sakya Trizin 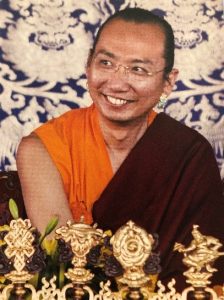 The Complete Path seven-year program or their equivalent.

Nagarjuna’s Sixty Verses, Yuktișașțikakārikā, is the most concise philosophical work on Buddhist reasoning by second-century Indian Buddhist master Nagarjuna, founder of the Middle Way School of Buddhist philosophy, Madhyamaka. It is one of his most often cited works by Madhyamaka commentators, and is included in the Six Logical Works of Madhyamaka (rigs tshogs drug) ny Nagarjuna, which forms the textual basis for Middle way studies. Standing midway between his other masterpieces on philosophy and religion, in the Sixty Verses Nagarjuna describes the gradual cultivation of non-dualistic wisdom and compassion.