The 24th Great Sakya Monlam Prayer Festival was held in Lumbini from 15th to 25th December, 2015.

Please visit http://www.sakyamonlam.org for detailed information on this auspicious event. 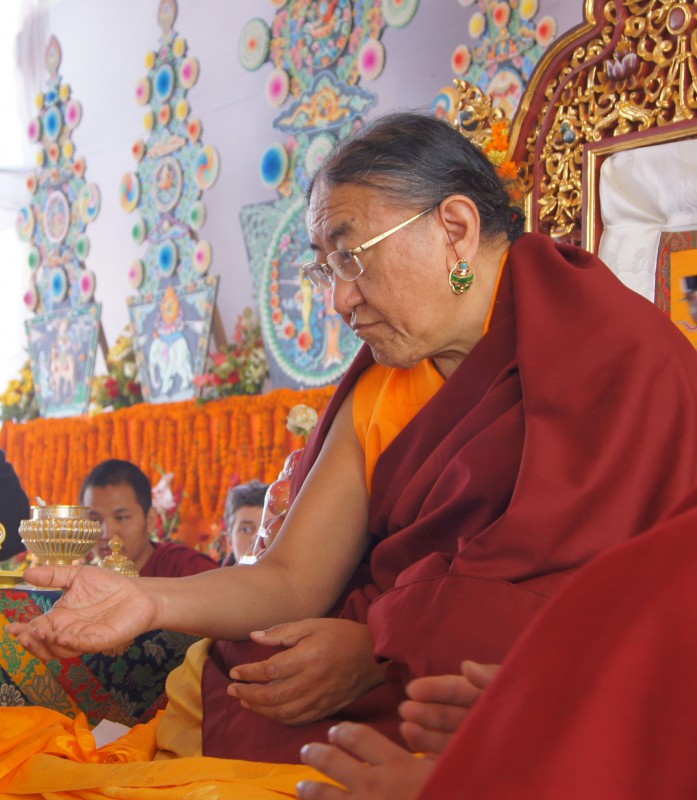 After leaving Tibet in the 1950s, His Holiness the 14th Dalai Lama, His Holiness the 41st Sakya Trizin and the other spiritual leaders of the different schools of Tibetan Buddhism, worked to re-establish temples, monasteries, nunneries and monastic colleges, mainly in Nepal and India. Under their leadership, the Buddha’s doctrine is flourishing once again and most Tibetan traditions have been successfully re-established, including the performance of the  annual Sakya Monlam Prayer Festival.

Venerable Tarthang Tulku, of the Nyingma tradition, has assisted in this revival by generously sponsoring the annual Sakya Monlam Festival. He has also played a very important role in re-establishing the Monlam Prayer festival for all four schools of Tibetan Buddhism, with his vision that the Monlam Festival be held in all four Buddhist holy sites, namely Lumbini, Bodhgaya, Sarnath and Kushinagar. In addition to this, he suggested to the great lamas that the King of Prayers should be the main prayer of the festivals, requesting the recitation of 100,000 Samantbhadra prayers during each Monlam.

In establishing the annual Sakya Monlam Prayer Festival, two important decisions needed to be considered -which prayers should be recited, and where to gather each year.

The prayers to be recited at the Sakya Monlam were determined by His Holiness the 41st Sakya Trizin, who chose 100,000 recitations of Samantabhadra’s King of Aspiration Prayer as the main prayer. His Holiness also decided on Lumbini, the birthplace of Buddha Shakyamuni, as the site for the festival.

Today, thousands of monks, nuns and lay people from many countries gather at this sacred site to pray together for universal peace.

The first Sakya Monlam Prayer Festival took place in Lumbini in 1993, from the 1st to the 15th of March. His Holiness the 41st Sakya Trizin presided over the proceedings with His Eminence Ratna Vajra Rinpoche and His Eminence Gyana Vajra Rinpoche. In attendance were His Eminence the Late Chögye Trichen Rinpoche, His Eminence Luding Khenchen Rinpoche, the Luding Shabdrung Rinpoches, Thartse Shabdrung Rinpoche and Gonkar Dorje Tenpa. Over a thousand tulkus, lamas, monks and nuns also attended this first Monlam Prayer Festival.