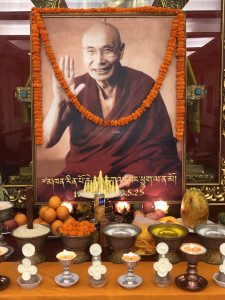 Today IBA celebrated with prayers the parinirvana of Khen Rinpoche Kunga Wangchuk (1921-2008), one of Sakya’s greatest modern scholars, founder of Dzongsar Institute, a renowned Sakya Tibetan Buddhist centre of learning. For many years Khen Rinpoche studied as a student of Jamyang Khyentse Chökyi Lodrö, but was imprisoned for 18 years by the Chinese until 1980. Moving to Sikkim after being released, he established Dzongsar Shedra in 1983 at Dechen Ling. Then in 1985, he relocated to Bir, India, establishing Dzongsar Institute where he continued teaching till the age of 73. In 2004 Dzongsar Institute was moved to Chauntra, its current location, where Khen Rinpoche Kunga Wangchuk’s legacy continues in the instruction of hundreds of student sangha. Several of IBA’s sangha received teachings at Dzongsar Institute, both in India and in Tibet.